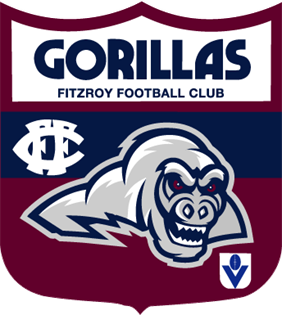 Fitzroy which had been nick-named the Maroons for a number of years, wanted a more aggressive mascot and decided, on the suggestion of a certain Dr. Cec Raphael, to adopt a new moniker, that of 'The Gorillas' in 1939. In 1941 for the first time they added a blue FFC monogram to the front of the guernsey, which has to this day remained, although it has changed colour several times!

In 1942 Fitzroy made the finals for the first time since 1924. They followed this up with a Grand Final appearance in 1943 which they lost against Richmond. However the following year on 30th September 1944 they turned the tables defeating Richmond by 15 points in the Seniors. The Reserves also won the premiership, (the only double ever achieved by Fitzroy) defeating Collingwood also by 15 points, the week before. The 1944 flag remains the eighth and final VFL/AFL premiership that Fitzroy achieved. It was also the last VFL/AFL Day Grand Final they were ever to appear in, although there were to be many subsequent finals appearances.

Frank Curcio became the first Fitzroy player to play 200 senior games for the club in 1946. Fitzroy contested the Preliminary Final in 1947, but lost to Essendon. The 1948 season was a disaster with the biggest fade-out in the history of the VFL. After the first 11 matches, Fitzroy was leading the ladder with nine wins and two losses. The club did not win another senior match for the season.

Allan 'Baron' Ruthven won the Brownlow in 1950, but Fitzroy finished in fifth position, just outside the then Final Four. They repeated this effort in 1951, finally making the finals again in 1952. Unfortunately after a hard one point win over Carlton in the 1st semi-final, Fitzroy lost to Collingwood and finished fourth. In 1956 Kevin Murray won Fitzroy's Best and Fairest Award for the first time at the age of 18. 1956 was also notable as the year the Club changed the colour of the FFC monogram from blue to white.