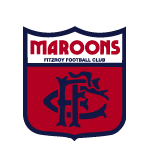 The Fitzroy Football Club was born on 26th September 1883 at the Brunswick Hotel as a result of a meeting by business man George Toms and former Fitzroy Mayor John MacMahon. The meeting elected a provisional committee who quickly decided that the colours of the club were to be a blue cap and knickerbockers, maroon jersey and hose.

Fitzroy was admitted to the VFA in 1884 as the Fitzroy Senior Football Club and played from the Brunswick Street Oval. It took 11 years to win their first flag which occured in 1895.

Fitzroy quickly had success winning the second VFL premiership in 1898 against Essendon. Fitzroy was the most successful team in the first ten years of the VFL, playing in the finals for nine of those first ten - for four premierships. Three times in that period Fitzroy was runner-up. Fitzroy also won the 1899 Premiership, lost by 4 points to Melbourne in the 1900 Grand Final and won the Premiership again in 1904, after losing by two points in the Grand Final in 1903. Fitzroy won their second back to back Premiership in 1905, with Percy Trotter being named Player of the Year, an award which was essentially the equivalent of the modern Brownlow Medal.

Fitzroy changed their uniform in 1911 to a maroon guernsey with blue collars and cuffs and white shorts. They won their fifth premiership in 1913. World War I broke out the following year and by 1916, 15 Fitzroy players and former players had enlisted. Two new clubs Richmond and University had joined the league by 1914. While football continued during the war, five VFL clubs went into temporary recess and University disbanded permanently. Only Fitzroy, Collingwood, Richmond and Carlton continued to play on, their teams mostly filled with older men and those who remained at home in "essential services." In 1916 Fitzroy became the only League team in history to go from last at the end of the home and away season to win the Flag, an unusual occurence that is never likely to be repeated in VFL/AFL history.

After the war ended in 1918, Fitzroy had mixed success until 1922, when led by Jimmy Freake and Percy Parratt it defeated their arch-rival Collingwood to win their seventh flag. After 1924, Fitzroy did not figure in the finals again until 1942, a period of 18 years. This was somewhat surprising considering that during that period Fitzroy had at its' disposal some of the all-time greats of the club including Haydn Bunton who won three Brownlow Medals in 1931, 1932 and 1935, Dinny Ryan who won the Brownlow in 1936, and Wilfred 'Chicken' Smallhorn in 1933. Fitzroy players won the Brownlow in 1931, 1932, 1933, 1935 and 1936 and yet could not figure in the finals in any one of those years. Haydn Bunton believed that 1934, the only one of those years where a Fitzroy player did not win the Brownlow was his best year ever, but the Medal that year was won by Essendon's Dick Reynolds.